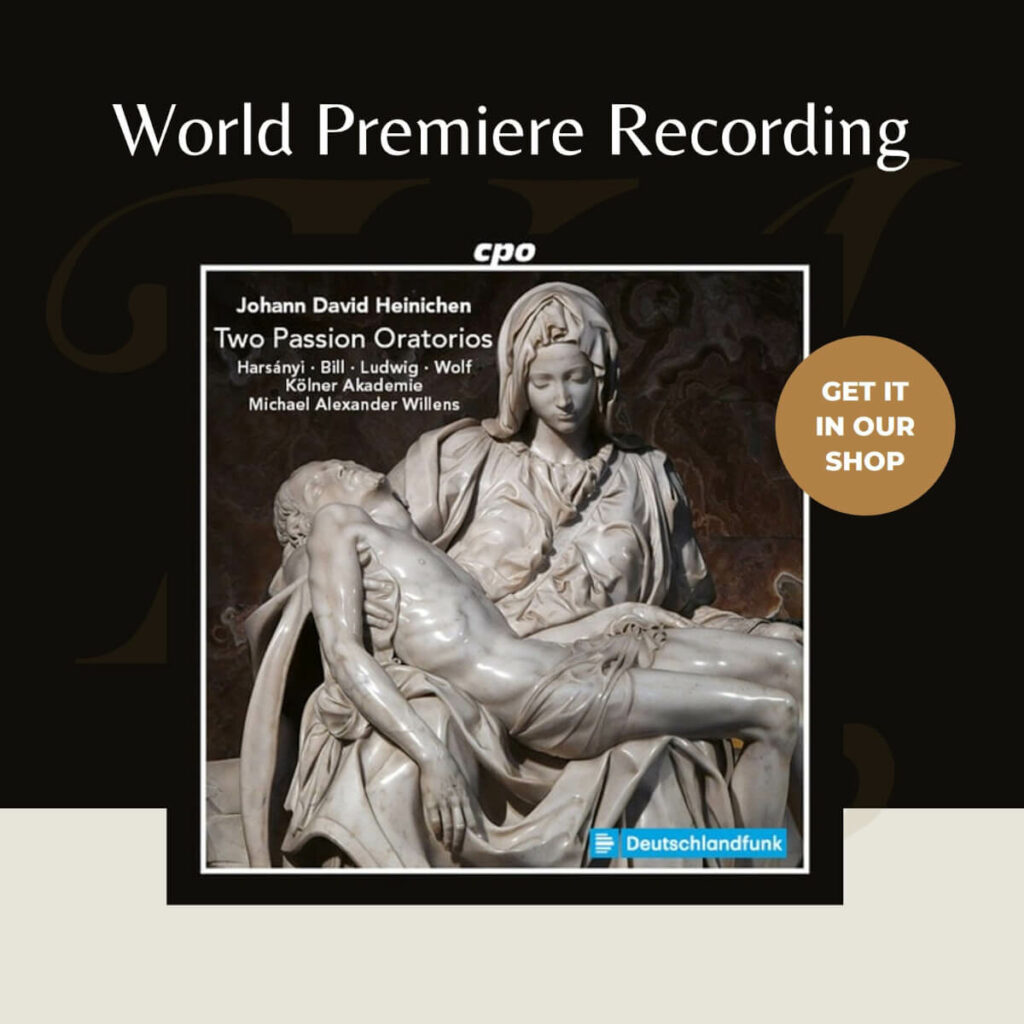 We are excited to release our world premiere recording of two gorgeous passion oratorios by the German baroque composer Johann David Heinichen just in time for Easter.

The passion oratorios that Johann David Heinichen wrote for the Dresden court attest to the cultural and confessional liberty of the Saxon residence.

Heinichen was born in 1683 in the Saxon town of Krössuln and was raised in the Lutheran faith; he attended the Leipzig St. Thomas School and studied with Johann Schelle and Johann Kuhnau before finding employment as a court musician and opera composer at Zeitz. In order to improve his skills as a composer of theatrical music, he went to Italy in 1710, where he became acquainted with the Saxon Crown Prince Friedrich August (later to become August III); fascinated by his music, the pretender to the throne convinced his father to recruit Heinichen as Royal Polish and Electoral-Saxon Kapellmeister. In Dresden, where his employment began on 1 August 1716, Heinichen wrote not only numerous operas and celebratory works (among them a number of Serenate for the crown prince’s wedding in 1719) but also increasingly music for the Catholic court services. His overabundant, multi-faceted oeuvre comprises large-scale Italian operas and a wealth of vocal music.

In the early 18th century, proficiency in the different musical styles of the time was a general requirement for a musician’s employment at court, and neither the sovereign nor his musicians had any denominational reservations. This may be demonstrated by a look at Heinichen’s passion oratorios.. written to be performed on Good Friday. Three of his smaller oratorios from the 1720s have been preserved: two of them are based on Italian librettos most likely provided by Stefano Pallavicino, who was employed at the Dresden court from 1719. and were used to introduce the sepolcri tradition in Dresden. Considering their length of approximately 45 minutes (which Heinichen indicated at the end of the scores), the Italian oratorios replace the fully orchestrated passions for which there was no space in the Catholic liturgy. The affinity to opera seria is apparent; the chosen keys, gestures and scorings as well correlate with the models familiar from baroque music theatre:

Come? S’imbruna il ciel, according to the date written on the composing score, was composed in 1728 and thus is the last of the sepolcri by Heinichen transmitted in Dresden.
The meditation on the events of the Passion of Christ concentrates on the moment of the earthquake that according to the biblical narrative occurred immediately after Jesus died. The depiction of the tremendous natural phenomenon provides Mary, John (Jesus’ favorite disciple) and Mary Magdalene with an opportunity to contemplate their personal relationships with Christ on the cross.

The autograph composing score of L’aride tempie ignude is not dated, but following research on the paper and format of the manuscript, the piece was composed in 1724, which makes it the earliest of Heinichen’s sepolcri transmitted in Dresden.The meditation on the events of the passion of Christ is set as an allegorical play of Death (Morte) and Hope (Speranza), Divine Love (Amor divino) and Penitence (Poenitenza), and follows an easily comprehensible dramaturgical plan. Triumphant Death, who is convinced he has gained the ultimate victory, is opposed by Divine Love pointing to the superordinate salvific plan, which is actualized for mankind through penitence and hope. The despondence of the first is turned by the indicated perspective into hopeful expectation, which leads to a consolatory maxim in the concluding chorus: In this piece as well death literally does not have the last word.

The concluding ensembles in these sepolchri may (and should) be restricted to the soloists. In any case, there are no records documenting the participation of additional singers, nor is there much information on the orchestral forces. The instruction in the oboe parts regarding the switch from soli to tutti indicates that at least these parts were executed by more than one player.

Subsribe to our newsletter

He was a musical prodigy whose life was far too short. And at the same

E. T. A. Hoffmann – wasn’t that a writer? That is probably the question that